The central question of C12 is to perform beam steering of THz waves, in the 1st phase based on a silicon-MEMS reflect array. Reflect-arrays can easily add beam steering to any THz system. They avoid a bulky mechanical rotation of the whole antenna or even the whole transceiver system and are therefore predestined for the goals of MARIE. A reflect-array consists of reflectors that are mechanically displaced resulting in a variable true-time-delay of the reflected wave, Fig. 1a. Reflect-arrays require arrays of reflectors, each reflector combined with an individual actuator that allows a throw of at least λ/2 perpendicular to the reflecting surface. At THz frequencies, the wavelength becomes reasonable for MEMS solutions (λ ≈ 1200 μm at 250 GHz). For defined beam steering (MARIE challenge 4: … to precisely localize…), the time / phase delay of each reflector has to be reproducible and predictable. In microwave group antennas, this is achieved by switched delay lines. At THz, these lines become detrimentally short and common RF MEMS such as switches for delay lines are not feasible any more. The reflectors replace the delay lines when switched stepwise in fractions of the center wavelength. This concept has not yet been investigated elsewhere. A stepwise throw of up to 600 μm (λ/2) is nonetheless a challenging task as the corresponding actuator has to fit completely underneath a single reflector.

In-plane concepts with phase-shifting MEMS metamaterials are known, but a difficulty is the predictable control of the phase. As 600 µm throw cannot be realized out-of-plane, each element is realized in a silicon-on-insulator technology (SOI) (Fig. 1b). Elements can be fabricated on-wafer in rows and rows can be stacked into arrays. A first idea was to cascade step-like actuators as shown in (c). The application of MEMS-based reflectors into suitable MEMS reflect-arrays has been investigated in cooperation with S01 [A] and shows promising opportunities for precise beam steering.

Fig. 1: (a) Working principle of reflect-array; (b) reflect-array of stacked chips; (c) Layout of an actuator system 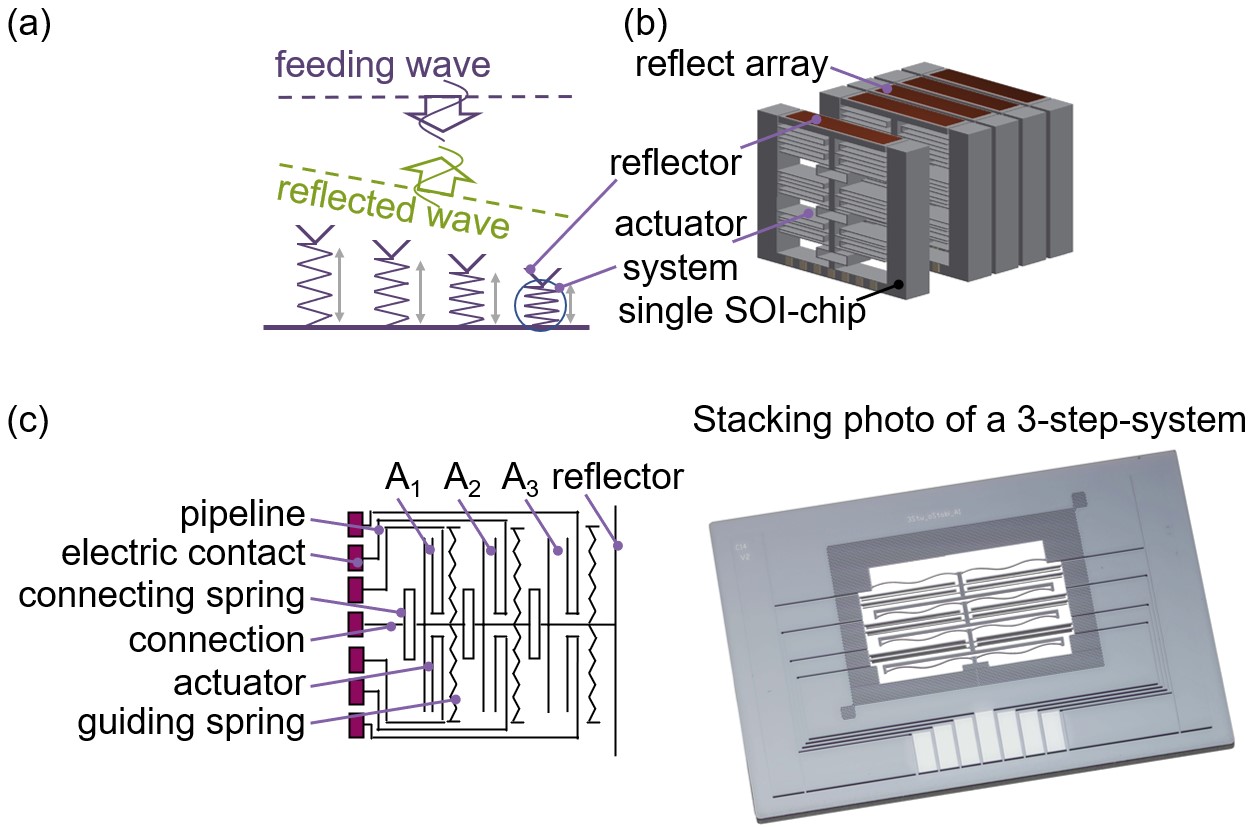 This concept does not require changes on the transceiver / antenna as C12 was introduced in 2018 and granted for 2019. It can be integrated into most existing systems for test.

At first, mechanical models had to be developed that describe the influence of the system components (actuators, springs, guides) on a step-wise throw. Basically, two different concepts were promising.

The first approach is close to the basic multi-step-concept (Fig. 1c) and is presented in [B]. The actuators are grouped serially; the reflector is connected via springs. By applying a voltage at the first actuator A1, a displacement xA1 is generated and transmitted through the entire system to the reflector. This initial displacement reduces the gaps between the electrodes of the other actuators A2 to Aj. By successively activating the actuators, a well-controlled stepwise displacement is generated. Once all actuators are deflected, the reflector is displaced by the maximum total throw. The demands on the system and the analytic transfer function are derived. A disadvantage is the high count of electrical contacts; each step has to be addressed individually: 32 steps require 36 connections.

A detailed look at the requirements for the reflect array concept showed, that the number of external electric contacts should be limited. This is mandatory for a dense 2D reflect array. In consequence, a completely new working principle of a bit-coded actuator (Fig. 2a) [C] and its transfer function has been designed and evaluated. It combines an electro-mechanical 5-bit digital-to-analog converter (DAC) and a dedicated mechanical amplifier (mechAMP) [D]. The amplifier consisting of levers increases the deflection of the DAC to achieve the required throw for the reflector. The adoption of the stiffness of the DAC to the stiffness of the amplifier requires a careful component design. The 5-bit system consists of five stages (h1,…,h5). The interconnection of the stages is realized using connecting springs (stiffness kci). The displacement is generated by spring-connected actuators (stiffness kai). To guarantee a translational displacement of the stages, guiding springs ksi are used. At the most significant bit (MSB), the output of the DAC xDAC is connected to a mechanical amplifier. By applying a voltage on the 0-side of the actuators, the position of the system is {0,0,0}. When applying a voltage on the 1-side of the least significant bit (LSB), the system reaches the position {0,0,1}. When applying a voltage on each 1-side of the actuators, the position {1,1,1} is reached. 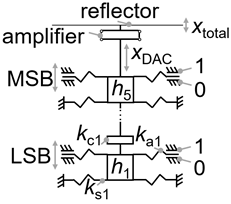 For both concepts, the spring stiffness has to be adopted to the actuators. The springs require a quite high stiffness in x-direction and a low stiffness in y-direction for a bi-directional throw of 300 µm and a pure translational displacement of the system. For these concepts, highly selective springs are beneficial to ensure a stable performance of the system, the spring is “soft” in y-direction, but still stiff in x-direction. In a conventional spring, the force increases almost linearly with the deflection. A corrugated spring allows for a bi-directional deflection while having a much lower and more linear force reaction than conventional MEMS-springs at an almost unchanged thickness and length. In Fig 3a,b a conventional MEMS-spring is compared to the spring used in project C12. The optimized spring also exhibits a lower maximum stress and a lower force reaction. A publication is under preparation.

Fig. 3: (a) Comparison of conventional spring design and a highly selective spring; (b) Compared force reaction.

The chosen electrostatic actuators are shown in Fig. 4 a,b at different switching states. The parallel-plate actuators turned out to be useful for both concepts, whereas common comb-drive actuators are most suitable for the bit-coded concept with mechAMP [D].

The structure of a parallel-plate actuator is shown in Fig. 5. When applying a voltage, the electrodes bend down as soon as the force generated between the electrodes exceeds the spring force of the cantilever. In consequence, the electrodes will approach, and the system will perform a throw that is conducted to the reflector.

The systems are fabricated on (100)-oriented SOI-substrate with a device layer of 50 µm and a handle layer of 300 µm. Handle and device layer are functionally swept to reach the required width of the reflectors. A dicing-free SOI-process was implemented to separate the devices from each other. For the bond contacts, a 100 nm aluminium layer is used (Fig. 6a). Then, the wafer is patterned and deep etched (Fig. 6b) by a Deep Reactive Ion Etching (DRIE) process in order to release the device layer from the actuator system. Then, the actuator system is patterned and deep etched (Fig. 6c). HF vapor etching separates the single SOI-chips and releases the moving parts and parts of the handle layer to prevent a pull-in of the electrodes (Fig. 6d+e). Atomic layer deposition (ALD) is used to deposit 50 nm Al2O3 to isolate the electrodes. Finally, the actuators are assembled and bonded on a printed circuit board.

Fig. 6: Fabrication process of a single SOI-Chip and a stacked photo of a single reflector chip with released backside 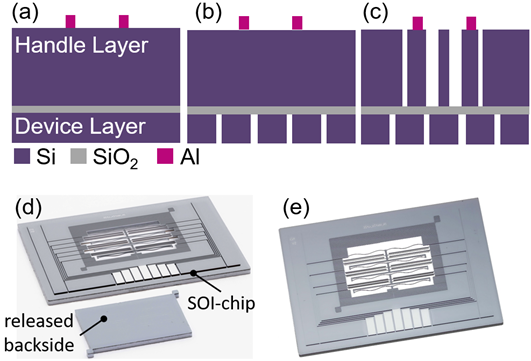 To evaluate the reflect array, a mechanical test site including a high speed camera, a Labview driven voltage source combined with a multiplexer for switching the electrostatic actuators is necessary. For a compacter switch, MEMS relays are intended to be integrated in the reflect array.

Based on a first layout, all mechanical parts (highly selective springs, electrostatic actuators, mechAMP) have been evaluated to identify the most suitable designs. All core components are feasible, especially the comb-drive actuators as well as the parallel-plate actuators, which are operational. The reflector turned out to be one of the crucial factors since it tended to rotate out of plane due to its length and required width. In the meantime a design overcoming these challenges has been developed, it can be seen in the figure 7. 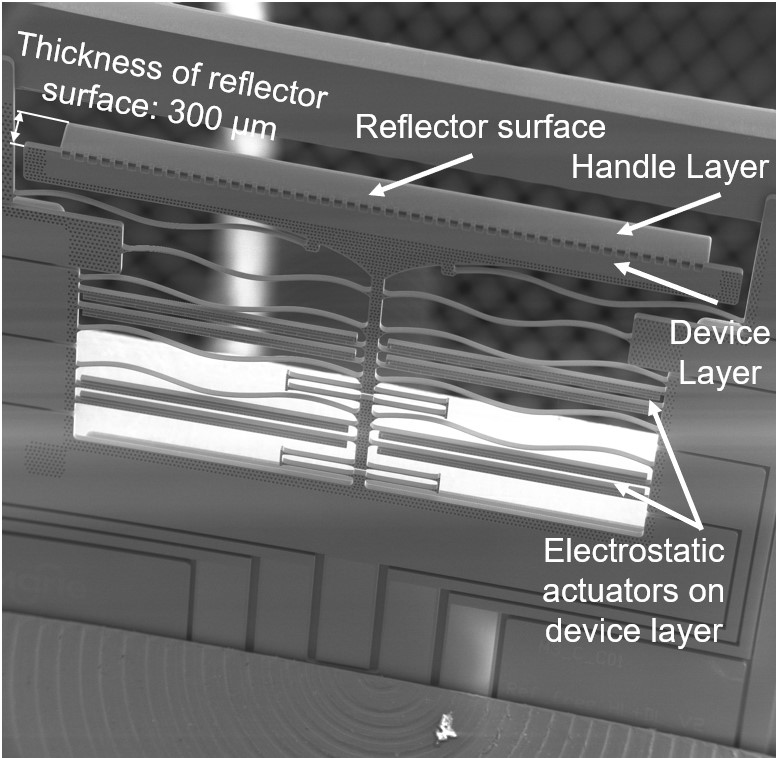 The second layout contains versions of the bit- and the step-concept. The different 3-bit and 5-bit versions with amplifier are expected to realize bi-directional throws up to 100 μm. The testing of a 3-bit system has even reached a displacement of up to 150 µm. The systems vary concerning the design of springs and actuators. Different 3- to 5-step versions are expected to realize uni- and bi-directional throws up to 60 µm. 32-step versions are under way to realize a bi-directional throw of 300 µm; they have been delayed by Corona lockdown. The electrostatic parallel-plate actuators show pull-in voltages starting from 4 V. Exemplarily, the 154 µm displacement reached with a comb-drive actuator system is shown in the figure below. Some further results of the second mask layout are shown in the video below. 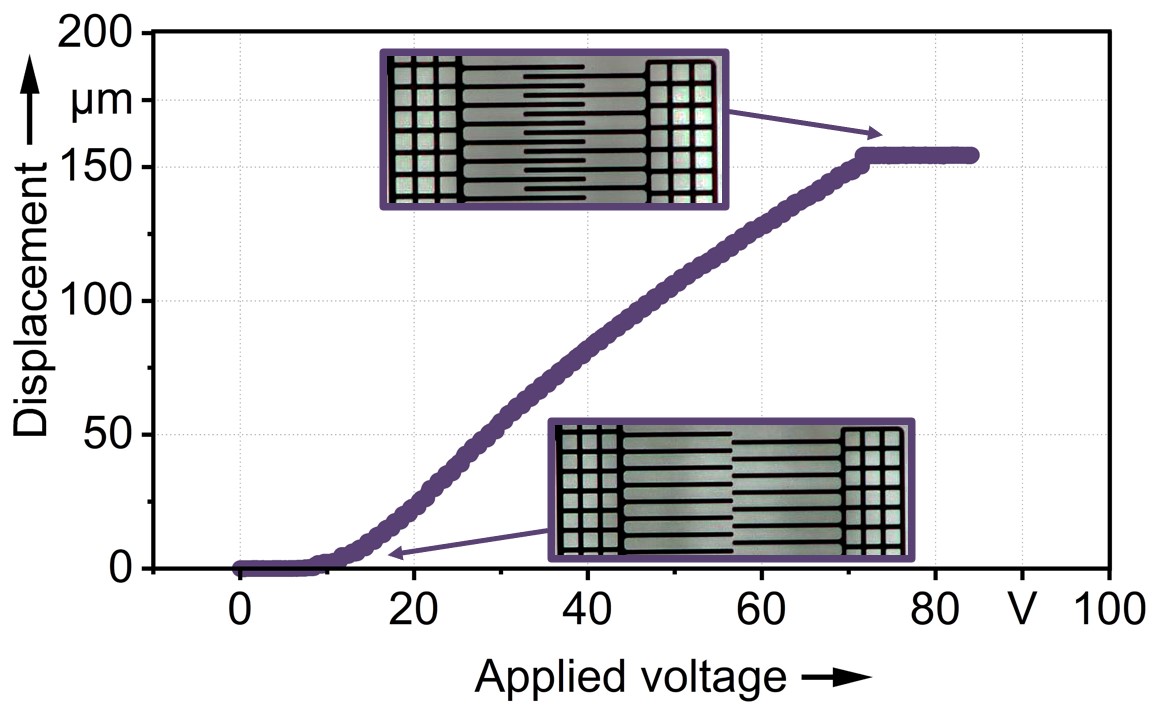 In Fig. 8, the characterization of the bit-coded actuator is shown. The exemplified system consists of electrodes with a distance xelectrode of 20 μm (Fig 8a). As soon as the applied voltage amounts 7 V, the tips of the electrodes start to pull-in (Fig. 8b). An increase in voltage to 15 V completes pull-in of the whole electrodes (Fig. 8c) and deflects the reflector. Depending on the initial distance of the electrode tips the actuators of the multi-step concept start to pull-in at about 13 V (Fig. 8d). When increasing the applied voltage, the opposed electrodes approach closer (Fig. 8e). The voltage where electrodes start to bend to the other system components is 30 to 35 V (Fig. 8f).

The functional description of the mechanical reflect array demands for a detailed definition of the required parameters. In cooperation with J. Barowski (M04, RUB) and with X. Liu (S01, UDE) these demands were derived. The investigations laid the foundation for the MEMS-based actuator system and the designs of the reflectors. A generalised proposition for a reconfigurable MEMS-based reflection grating and a mathematical model for calculating the radiation pattern of the THz wave was derived and resulted in a joint publication [A]. These results show, that this concept allows a flexible beam steering; a high count of reflectors is reasonable. It confirmed that the actuator design is suitable for broadband reflective beam steering.

V-grooves are well-known for fibre alignment, but the assembly of fibre arrays is difficult. Based on own preliminary work [1], rhombus-shaped V-groove alignments were provided that allow a simple and extremely precise assembly of multi-fibre arrays for project C07. The flow-chart for the fabrication is presented in Fig. 9 (a)-(c), Fig. 6c shows fibres aligned within the channels. Fig. 9d shows a fabricated chip.

MEMS technology allows to fabricate Si-based tags for identification. Therefore, high resistivity silicon was machined according to the requirements of C09. A tag is a photonic crystal waveguide with mode-transforming antennas. This supportive work has also encouraged the C12 2nd phase proposal.

For the fabrication of resonant tags, a precise DRIE process is required. The fabrication process is illustrated in Fig. 10 (a)/(b), and a stacked image (photo) of a resonator is shown in Fig. 10 (c)/(d). This work resulted in a joint publication [E]. C12 also fabricated waveguides for project S01. The fabrication is basically identical to the process described for the resonators. The specimens were delivered and are yet to be characterized.

For all project-related publications please click here and scroll to the C12 section.

[H] B. Goj, L. Dressler, M. Hoffmann, Design and characterization of a resonant triaxial microprobe, Journal of Micromechanics and Microengineering, 25 (2015) 125011