The primary objective of our project is to demonstrate the potential of high average power ultrafast laser-driven THz sources for MARIE scenarios. Recently, we achieved several record-breaking systems [1], [2] based on Optical Rectification (OR) in χ(2) nonlinear crystals, driven by a 100 W-class high-power ultrafast laser system developed in-house [3] based on our group’s expertise in Thin-Disk Lasers (TDL). Most remarkably, we demonstrated a THz source with 66 mW of average power delivering single-cycle pulses at 13.4 MHz repetition rate [1], which is the highest reported to date from a laser-driven THz source operating with MHz repetition rate. This source was based on OR in Lithium Niobate in the tilted-pulse front set-up, and delivers single-cycle pulses with bandwidths extending up to 2.5 THz. The performance of our source is comparable to what is typically achieved in accelerator-based facilities – but from a lab-based compact source. Below, we compare our result to the state-of-the-art of lab-based, ultrafast laser driven sources. 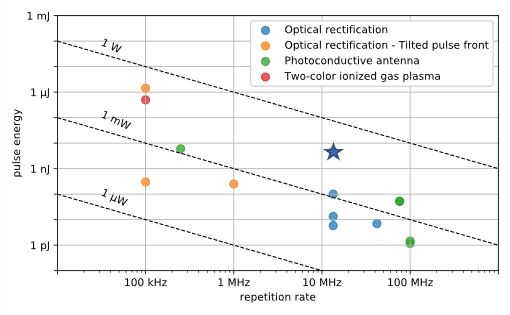 Having reached this unique performance, we could recently show the potential of this type of THz-TDS source with high average powers in combination with highly sensitive PhotoConductive (PC) antenna receivers [4] for improving THz imaging applications within the vision of MARIE [5]. The experimental set-up, including the generation set-up and compact high-power laser oscillator, is shown in Fig. 2. We imaged a pentagonal polymer probe, which has very low reflectivity in the THz domain, using a lensless (i.e. the object is illuminated by a divergent THz beam) imaging method based on a radar migration image reconstruction that can generate object images from time-domain data regardless of their size, shape, orientation and relative position with respect to the THz transmitter and detector, which represents an important advantage for real imaging scenarios, such as those envisioned in MARIE.

Our source significantly outperforms typically used low-power THz-TDS in terms of reconstructed image quality. In Fig. 2 (images on right hand side), one can see the significantly improved image contrast compared to the same measurement using a state-of-the art commercial TDS system with less than 200 µW of average power. We highlight that our measurements allow us to distinguish the two different materials of the polymer probe, which is not possible using the commercial set-up. In most recent measurements, we could even image the sample hidden inside a box made of a 3 mm thick medium density fiberboard, showing the potential of our powerful laser source for the MARIE vision, in difficult scenarios.

In the 2nd phase of MARIE C10 will be merged with Project M01 in the second funding period.

For all project-related publications please click here and scroll to the C10 section.