The design of an energy-efficient wireless device that can localize and characterize materials, and is capable of fast acquisition of multiple spots on the target with high spatial resolution, requires the utilization of multiple transmit and receive antennas. In order to obtain a compact design and a small form factor, the transmit and receive antennas are placed close together. In order to characterize various sub-layers of the target, the envisaged system should be capable of resolving backscatters from sub-surfaces of the target. For the fast acquisition of the image with reduced complexity, the device should be capable of faithful reconstruction of the scene from a minimal number of samples (sparse sampling). At the same time, for precise characterization, the device should achieve a high resolution of material responses.

In realizing these design goals, various challenges have to be addressed. Backscatter and radar systems are inherently limited by transmit signal leaking into the receive chain as a result of imperfect leakage cancellation. This is much more severe in monostatic radar systems, which use the same antenna for transmission and reception. To make matters worse, in MIMO radar, there exists a leakage path between each transmit-receive antenna pair. Practical limitations on sampling rates cause interference between backscatters from sub-layers of the material. Unlike the channel modelling in the ranges of up to a few GHz, each multipath component potentially undergoes different frequency selective fading due to differences in absorption properties of materials at THz frequencies. Classical models based on point target assumption are not directly applicable here, because of the small form factor and short-range nature. Additionally, the trade-off between sampling and resolution becomes critical.

In this project, we propose a system of MIMO material characterization in the THz regime that considers the aforementioned challenges and trade-offs. By utilizing tools from signal processing and optimization, this project aims to address these fundamental challenges through the following central objectives:

The project addresses an open research problem, as digital interference compensation, as a complement to its analog counterpart, has not been addressed so far in the research literature for the frequency range considered in MARIE. Thus, the project constitutes an integral part of the MARIE goal to design technologies for optimal characterization and classification of materials. 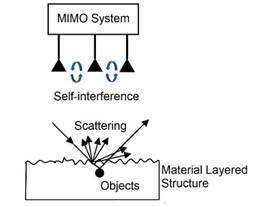 In the context of object identification, we proposed adaptive clutter-reduction approaches to improve the ability of the object identification and parameter estimation of the objects. Here, we examined system-related clutters and external clutters in MIMO THz systems. In more details, self-interference (leakage) as illustrated in Fig.1 and surface scattering were considered as a system and external clutter, respectively. In the context of cutter removal, we investigated the effect of self-interference in MIMO systems. In this regard, we examined the temporal variations of the self-interference channel as well as the linear and nonlinear components in the self-interference and proposed countermeasure. To be more precise, a novel adaptive self-interference cancellation method in the digital domain based on Kalman filter theory was proposed in [1]. In this work, linear and nonlinear components in the leakage channel were considered in the modeling and the temporal variations of the leakage channel were covered by a composite state-space model. Furthermore, for conceptual verification purposes, the proposed method was tested using a practical prototype implemented using Universal Software Radio Peripheral (USRP) devices. The proposed method achieved good performance with low computational complexity compared to the state-of-art self-interference cancellation methods.

In the context of sparse signal processing and material parameter estimation, in [2], the problem of identification of objects inside a layered structure in the presence of clutter due to the scattering of the layered surface was inquired. Here, first, we developed a channel model in the THz band related to object identification. Next, a sparse signal processing-based signal separation method was proposed to recover the signaling response of the objects. In this work, it was shown that even objects with weak responses can be identified by sparse signal processing in the presence of strong clutter. Further, in this work, we compared the proposed method with state-of-art methods and showed that the proposed method achieved better results.

In [3], we studied the multiple-layer object identification in the presence of clutter. Here, to improve the detection, we proposed space-time waveforms that adapt to the multilayer object response. Further, we maximized the backscatter (reflected) signal power under the transmit signal power constraint for improved detection. This optimization problem was formulated as a Semidefinite Program (SDP). In this work, we obtained the following result. While a single object scenario yielded to an analytical solution, yet the multiple object scenario with multiple clutter prevented a similar outcome and thus was solved numerically. Moreover, we showed that the optimal spatio-temporal waveform increases the reflected power from the multi-layer object and by increasing the temporal dimensions of the waveform, the number of antenna elements can be significantly decreased leading to reduction of hardware cost.

In our work in [4], we proposed a supervised learning-based novel algorithm for antenna array extrapolation for super-resolution Direction of Arrival (DOA) estimation. In this work, the relationship between the received signals of set-up with a low number of radiating elements (within a small array aperture) to set-up with a higher number of elements (within a bigger aperture) was obtained with the aid of dictionary learning. After that, only the input of the set-up with a low number of antenna elements was used to achieve the performance similar to the set-up with a large number of elements. In the simulations, we showed that our proposed method can resolve more DOAs compared to the set-up with a lower number of elements, especially in low SNR scenarios. Further, S02 collaborated with MARIE projects S03 and C01-05 on a collaborative review paper [5] which discusses the state-of-art remote sensing at THz frequencies. Therein, S02 discusses the state-of-the-art leakage cancellation for MIMO systems.

For all project-related publications please click here and scroll to the S02 section.