The work on M05 was organized by means of 7 work packages WP1 until WP7. WP1 and WP2 focused on SR methods. Radar imaging can be provided by suitable THz radar transceivers or in another form by THz cameras. The corresponding algorithms work very differently and thus were covered in separate work packages of M05 in the form of WP1 (SR Methods for THz Camera Imaging) and WP2 (SR Methods for THz transceivers).

Based on a literature research in WP1 several interesting optical super-resolution (SR)-methods were evaluated covering single- and multiframe methods. Three methods, e.g., the “Projection onto Convex Sets” (POCS) method, were selected and evaluated in more details based on artificial 2D radar images. For both THz cameras and THz radars also a low signal to noise ratio (SNR) and the blurring of images are important issues. Again, an investigation showed several candidates of optical methods (like the Wiener Filter and the Lucy-Richardson Deconvolution) for improving the quality of THz radar images. Another investigation covered the search for an optimal combination of several methods. Here the combination of a Wiener Filter and the algorithm POCS showed best results. For small metallic objects and a single-chip radar of OMNIRADAR with a 6 GHz bandwidth a resolution in the order of 3 mm could be achieved, being far lower than the theoretical range resolution of 21 mm. In later tests with the frequency domain spectroscopy (FDS) and time domain spectroscopy (TDS) systems and similar SR methods a sub-mm resolution resulted due to the more than 1300 GHz bandwidth. Finally, it could be shown that small metal entrapments and their contour can be clearly identified in beechwood which is not to be seen in the original THz camera image [6, 7].

In WP2, at first three different “fast-time domain” imaging methods were investigated. One technique is based on wave front extraction by means of fuzzy logic leading to an estimation of the angle of arrival (AOA). The second is the well-known Kirchhoff-Migration which produces an overlay of all possible circular, elliptical or ellipsoidal wave fronts and the third one is called wave-number extraction based essentially on the Fast Fourier Transform.

Concerning slow-time domain imaging the problem is quite close to SR imaging methods investigated in WP1. So again, the POCS-Algorithm was successfully applied.

Moreover, some special aspects of imaging including 2D and 3D contour extraction methods were investigated by means of simple and more complex real objects [3].

The basic research in this WP3 dealt with the influence of rough surfaces on the polarimetric reflexion behaviour of typical dielectric and metallic structures. The activities included the 3D assessment of such structures of indoor surfaces like walls. For further detailed investigations, a 3D printer produced scaled copies of the wall parts investigated in this first part of WP3.

For further investigations of the 3D printed parts, polarimetric measurements in the THz range were performed. These investigations performed together with M01 and C06 had the objective to assess the frequency dependent and angle dependent scattering behaviour.

Until now, the scope of the ellipsometry is limited to plane and smooth surfaces. To overcome this situation, imaging and ellipsometry techniques are merged. Based on the known position of the antennas, the round trip time extracted from a radargram, the angle of incidence and the intersection point (of emitted radiation and the surface) are determined by imaging and by a simplified raytracing approach. The first tests showed that a precise material characterization for small objects is possible. Furthermore, it has been proven that the depolarization is a solid indicator for the surface roughness. The remaining work will focus on the ellipsometry of non-planar surfaces and thus also on the aspect of simultaneous imaging and material characterisation of WP4. First tests with a ceramic stick and a mixed-material test object showed promising results.

The main idea here was to select reflected rays by their angle values for imaging on the one hand and by angles of about 45° needed for the ellipsometry on the other hand. But due to a lower signal-to-noise ratio (SNR) THz spectroscopy systems typically need averaging of measurements. So, the new concept is to perform several limited migrations followed by the corresponding ellipsometry measurements and instead of the POCS algorithm the Kirchhoff-Migration.

Instead of WP5 many more exiting activities within a new additional WP6 were successfully performed – as described in the following. 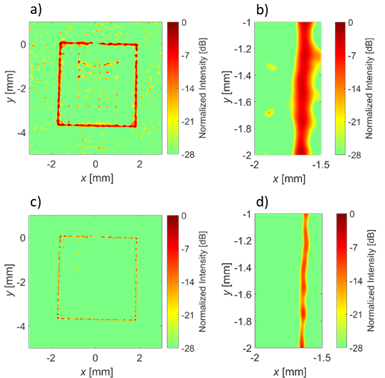 As mentioned before, as a remedy in consequence of the lack of the HFSE radar system, two THz spectrometers were investigated for possible use in M05 as an alternative to the HFSE system. This concerned one FDS acquired from TOPTICA for the S01 project and one TDS of the same company which was lent for 4 weeks. For both systems, a bistatic SR radar function could be achieved based on previous investigations with UWB- and sub-THz radars. This novel principle of obtaining a SR THz radar system without focussing elements like lenses (but with divergent beams) had the striking advantage of offering a 1 THz bandwidth and more - only limited by a lower SNR for higher THz frequency bands (beyond 2.5 GHz). Thus, sub-mm spatial resolution results could be achieved in terms of 400 μm concerning simple range resolution for individual radar signals, but 140 μm for the mean -6 dB width in case of SR imaging based on the whole set of radar measurements. To this end, the original UWB algorithms used for 9 GHz bandwidth at 9 GHz center frequency had to be adapted [5, 8, 9].

In February 2020, the THz spectroscopy system of MENLO was delivered and successfully installed in combination with further modified versions of the SR imaging algorithms investigated in WP1 and WP2 and the ellipsometry algorithms investigated in WP3 and WP4. The first tests using a 50-fold averaging of radar signals and postprocessing (in the form of denoising and deconvolution) revealed a further big improvement in terms of an about 32 μm mean spatial resolution for the postprocessed radar image (and 78 μm for the raw image) as shown in Fig. 1.

Lately the properties of this novel lensless radar system were compared against the High Power TDS spectroscopy system of project C10 and a vector network analyzer (VNA) based system of project M01. The investigations based on 16-fold averaging showed the pros and cons of these systems concerning imaging of small objects in combination with long range applications. On the one hand, due to the powerful laser of project C10, the SNR was better than that of the MENLO system and showed also internal structures of the test object. On the other hand, the possible higher averaging improves especially the MENLO System leading to higher bandwidth and better resolution. Even more improvements are possible with suitable postprocessing as shown in Fig. 1. The sub-THz VNA system could exhibit a very high SNR important for long distance (about 1-2 m) measurements of small objects like a pencil.

The main disadvantage of the VNA system is the typically small bandwidth of often less than 250 GHz which leads to several oscillations in the radar signal in case of a reflection or a scattering at the test object and limits the spatial resolution in the image as shown in Fig. 2a) to 2c). This effect distorts the shape of the object completely. A novel postprocessing method replacing the oscillations using suitable replica of the original radar signals produces images which are nearly not affected by the bandwidth limitations as shown in Fig. 2d) to 2f) [10]. 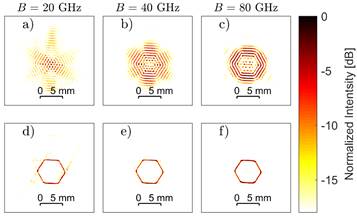 WP7 Other originally not planned activities

For all project-related publications please click here and scroll to the M05 section.